There’s a fast-food joint in our neighborhood that is redundantly called #Hashtag Burgers. We’ve never eaten there, but driving by its sign every day has provided us with fodder for our latest post about — you guessed it — hashtags. Namely, what’s up with them and how should small businesses be using them.

Hashtags have gotten a bad rap as of late, thanks to the irritating overuse of pound signs (#) littering countless Facebook and Twitter posts. Do you really need to know that Uncle Joe is #FeelingRelieved now that his shingles are under control? #TooMuchInformation, Uncle Joe.

This comedy bit by Jimmy Fallon and Justin Timberlake pretty much encapsulates the ridiculousness of hashtag usage. But if you’re hoping that hashtags go the way of QR codes (remember those? neither do we), keep in mind that when used judiciously and strategically, hashtags can be an effective way to expand your audience and connect with your customers. No, really.

Hashtags Annoy. But They Also Work.

In fact, research shows that tweets with hashtags get two times more engagement in the form of clicks, retweets, favorites, and replies than tweets without hashtags. What’s more, tweets are 55% more likely to be retweeted when they have one or more hashtags.

And it’s not just true of Twitter. Facebook posts that have one or two hashtags get 593 average interactions per post (that number drops to 307 with six to ten hashtags per post) The two-hashtag-only rule doesn’t seem to apply to Instagram, however, where interactions are highest on posts with 11+ hashtags. One study shows that Instagram posts using hashtags see a whopping 79.5% interaction per 1K followers. So bottom line is, if you’re not using hashtags on your business’s social media posts, #WhyTheHeckNot?

If you’re not familiar with hashtags beyond Uncle Joe using them to express his views on contagious skin conditions, they’re a simple device social media users employ to turn any word or group of words into a searchable link. Go to Twitter or Facebook, key in #WhatIsAHashtag in the search field, and you’ll see a slew of posts appear with the very same hashtag included in them. That’s the intended purpose of that little pound sign.

Hashtags were originally created as a way to make it easier for people to quickly find information posted on Twitter about a particular news-worthy event. They’ve since evolved to encompass all manner of trending topics — from what Steven Colbert said on The Late Show last night to the final score of the big game. Along with finding information, hashtags allow you to find other individuals who are interested in the same things you are, and join in on conversations about those things.

While hashtags were born on Twitter, they’ve been embraced by multiple social media platforms including Facebook, Instagram, Pinterest, Tumblr, and even stuffy ol’ LinkedIn. They’ve also been appropriated by everyday people who use them to express their own feelings and opinions regardless of whether anyone wants to hear them (we're looking at you, Uncle Joe).

Yes, Jimmy and Justin are correct: Hashtags can be incredibly annoying and seem pointless. But there is an art to hashtaggery, especially for small businesses. Let’s take a closer look at strategies for using hashtags that help your brand and marketing efforts, rather than hinder them.

First, let’s start with the basics. To make them linkable and searchable, your hashtags must be preceded with a pound sign (#), have no spaces between the words you’re using as the hashtag, and use no punctuation. You can, however, use numbers and capitalization to help make your hashtag more readable. So #Uncle Joe’s Shingles won’t work, but #UncleJoesShingles will. Just be careful how you use capitalization, as singer Susan Boyle will tell you following her unfortunate #SusAnalBumParty debacle.

You’ll also want to check your spelling, since one misplaced letter can entirely change the meaning of your hashtag (i.e., #GoodShipLollipop is one replace-p-with-a-t away from being really gross). As a general rule, keep your hashtags short and simple. No one wants to read through #UncleJoeHasShinglesAndItsDrivingUsAllCrazy. On the other hand, stringing together lots of one-word hashtags (#yikes #uncle #joe #has #shingles) is equally irritating. Another good rule of thumb is to use no more than two or three hashtags per post, unless you're using them on Instagram (refer back to above research).

Now, how does one determine what hashtags to use? There are basically two different approaches to take: 1) piggy back on an existing, preferably popular hashtag; or 2) create your own. Let’s start with the first option: Jumping on the hashtag bandwagon.

My Hashtag is More Popular Than Yours

If you’re going to use an already-existing hashtag, the idea is to use one that’s heavily trending that day to increase your post’s exposure to as many eyeballs as possible. If for some reason everyone on the planet seems to be posting about #UncleJoesShingles, then you may want to add that trending hashtag to your posts as well.

Chances are, though, the only one interested in Uncle Joe’s skin is Uncle Joe. So to find the most popular hashtags du jour, check the list of trending topics on the home page of your Twitter or Facebook account. There you’ll find current news stories, major world events, entertainment and cultural references, celebrities, holidays, and more that everyone on social media is talking about. These may also include recurring weekly trends such as #MondayMotivation, #WednesdayWisdom, and #ThrowBackThursday.

A few words of caution on using the piggyback approach. Inserting trending hashtags without rhyme or reason can make you look spammy and not credible. So if you’re going to use popular hashtags in your posts, make them relevant to your business and brand, as well as the post itself. For example, if you own a flower shop, by all means on February 14 add #HappyValentinesDay to a post about your sale on roses. If you’re a divorce attorney, however, that may not be the most appropriate use of a trending hashtag for your particular practice.

Along with the lists of popular hashtags provided on Twitter and Facebook, there are a range of resource available to find out what’s trending on social media. Here are a few of them:

Search this site to find trending hashtags by topic, as well as the top influencers (brands and individuals) using those hashtags. They’ve recently added hashtags that are trending on Instagram as well.

This site lets you search hashtags, follow conversations around those hashtags, and register your unique hashtags so no one else can appropriate them.

Access all manner of hashtag analytics and a handy hashtag dictionary so you can know what you’re really hashtagging about.

This site’s a bit hard to decipher but it shows you Twitter trends local to your area, in real time.

Like a lot of social media, hashtags have their own peculiar vocabulary filled with cryptic slang and abbreviations. Increase your hashtag hipness here.

Get Creative With It

Adding existing trending hashtags to your social media posts is one approach — perhaps the easiest and most obvious. The other approach is to create your own — a la #UncleJoesShingles. Be aware that inventing your own hashtag means you won’t be able to piggyback on the popularity of a heavily trending hashtag. Other people won’t be actively searching for your unique hashtag, which means your post is less likely to be seen by a wide audience of social media users outside those who are following you.

So why do it? Adding a unique hashtag to your social media posts can serve multiple purposes, including promotion. Lay’s Potato Chips did this with its #DoUsAFlavor campaign, which invited people to come up with and post new potato chip flavors using the hashtag. The folks with the best new flavors won prizes.

You can do something similar with your unique hashtag campaign, but on a smaller scale. Invite customers to take photos of themselves using your product, then post them on social media with your unique (ideally clever) hashtag, to get a discount or free gift. You can also create a unique hashtag around a specific event — the grand opening of your new location, for instance. Invite and incentivize people to share an event-specific hashtag to help spread the word.

But perhaps the most potent use of the unique hashtag is to amplify your brand’s voice. A clever, witty, funny hashtag can have as much personality as an ad headline. It can catch people’s attention, make them smile, laugh, think, and (even better) like or retweet.

As an example, Charmin has done some pretty wonderful branding work with the use of their series of #TweetFromTheSeat hashtags. Like this one:

So, we had a lot of coffee and oatmeal for breakfast today. Any guesses as to what time we’ll #tweetfromtheseat?

Funny, right? Kind of makes you like Charmin, and we're talking about toilet paper here.

A unique hashtag can also be a clever way to provide commentary that also adds to your brand voice. Take actor Lena Dunham’s tweet, in which her hashtag is part of the punch line:

(Note: Here she used both a unique hashtag and a trending one.)

You can also create unique hashtags as a means of inviting people to start a conversation. The aforementioned Jimmy Fallon does this a lot with his Last Night Hashtags, with great success. Just check out his #momtexts and #WorstGiftEver hashtags.

Brands have also used unique hashtags to create viral campaigns. Red Bull’s award-winning #PutACanOnIt campaign invited Twitter users to tweet creative photos of Red Bull cans. Thousands of people around the world joined in. The security camera company DropCam launched #CaughtOnDropCam, and again, people flocked to their Twitter page to post images (many of them hilarious) captured by their camera. You couldn’t ask for better exposure.

If you plan on using a unique hashtag to propel your brand and engage with a broader audience, you’ll have to think beyond Twitter and Facebook. Companies spend millions of dollars to support their hashtag campaigns — promoting them in print ads and on TV as well as on social media.

We’re not saying you have to as well. But it’s a good idea to start including your unique hashtag on your printed materials, your email signature, your website, your business cards, and any other communications you produce. If you’re doing a one-off hashtag campaign around a specific promotion or event, send out emails and/or postcards to help promote it. Do whatever you can to get the word — or in this case, the hashtag — out there.

It takes no small amount of quick wit, savvy, and good ad-copy skills to invent a unique hashtag. We love the challenge of creating them. It’s marketing at its most microscopic, but those few choice words can pack a powerful branding punch. If you’d like to hash out your hashtag strategy, just #GiveUsAShout. Unless of course, you have shingles, in which case we’ll put you in touch with Uncle Joe. 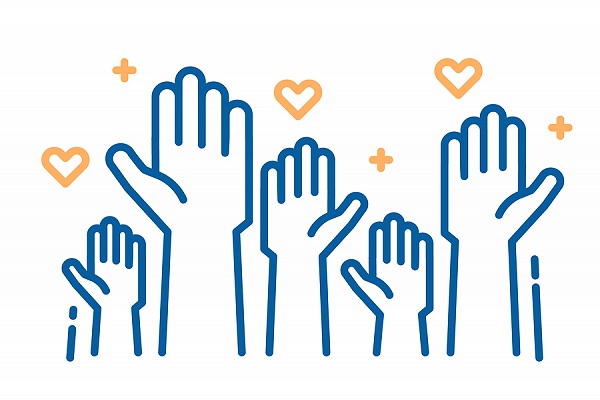 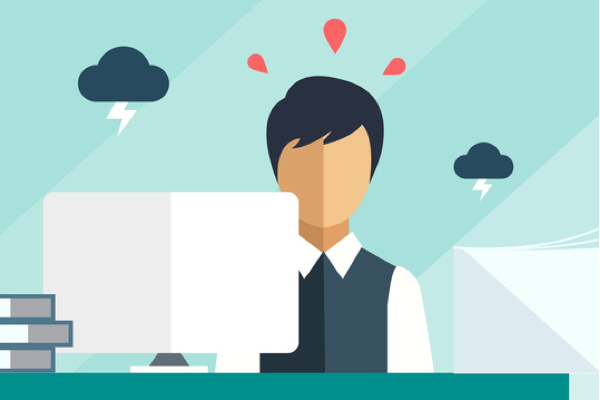 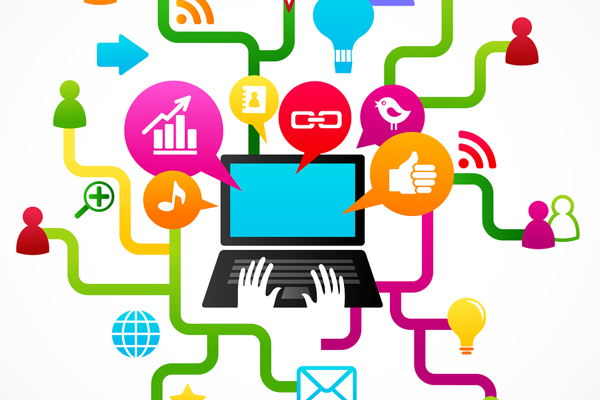 Our 2nd installation on social media for small business focuses on crafting your content and expanding your circle.